View cart “Ogma – Sidhe champion” has been added to your cart.

Please note that this is part of the Curse of the Kraken Kickstarter pledge manager. If you purchase this product, you will join the queue of backers waiting on rewards for the Kickstarter. This Kickstarter  has a delivery estimate of April, but will begin shipping in March.

One resin kit of Ogma. Supplied without a base and not assembled.

Ogma is a Sidhe warrior, who grew to fame as a gladiator while in servitude to king Eochu Bres. When Bres was overthrown, he became the new king’s champion, further glorifying his fame in single combat and in battle at the head of Sidhe forces. He eventually fell, though taking his opponent with him, when facing the Fomorian king, Indech.

Be the first to review “Ogma – Sidhe champion” Cancel reply 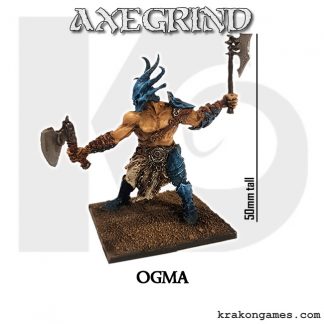